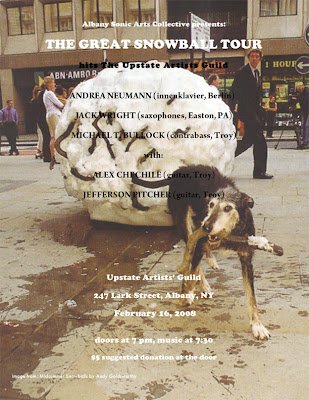 Hey everyone - It's that time where we try to drum up some excitement for our monthly series. This next one is going to be an AMAZING treat for the senses, so do whatever you can to be there!

Why not get this date on your calendars now?!? Seriously, this is not to be missed!!!

As the snowball rolls around the east coast it picks up players who then melt off, and new additions are joined. In the words of Jack Wright: "This is the idealistic version of free improvisation, that wants never to think that our individual projects of aesthetic adventure can be separated from the generous spirit of community. So in that spirit please share the information of this series with others, with your mailing lists and friends."

Jack is one of the busiest improvisers ever. I'd say "he's played with everyone," but I think a more accurate description is: he hasn't played with everyone yet but he's working on it. Through his efforts he's brought together countless musicians across many scenes - large and small, domestic and foreign - and taught a lot of people that if you play improvised music, or just like it a lot, you are far from alone.

Andrea operates at the heart of Berlin's hotbed of improvised electro-acoustic music, which in its turn is a vital organ of the global electro-acoustic music scene. Her instrument, the innenklavier, is a scale model of the insides of a grand piano (no keyboard), which she amplifies and plays with her hands and other objects. Imagine if "prepared piano" stopped apologizing for being a piano, graduated, and started its own company. Scratch that - its own country.

More on the musicians:

Andrea Neumann: Born 1968 in Freiburg, grew up in Hamburg. Since 1996 primarily active as improviser and composer in the areas of experimental and new music. In the process of exploring the piano for new sound possibilities, she has reduced the instrument to strings, resonance board and metal frame. With the help of electronics to manipulate and amplify the sounds (sometimes to make parts of the sound audible which are inaudible without amplification), she has developed numerous new playing techniques, sounds, and ways of preparing the dismantled instrument. Because the original inside piano is very heavy, a piano builder (Bernd Bittmann, Berlin) constructed a new and lighter one for her. She has worked intensively in the crossover area between composition and improvisation, and in the field between electronic and handmade sounds, with Berlin musicians such as Annette Krebs, Ignaz Schick, Axel Dörner, Robin Hayward and Burkhard Beins.

Jack Wright began playing saxophone in 1952, and after eight years quit to pursue an academic life. After turning to political activism in the late sixties, he began again in 1979, and has been touring the US and Europe since 1983. He created Spring Garden Music as a vehicle for organizing an improvisational music community, and is still active in encouraging the improvised music scene in Phila. He currently plays with about fifty partners in Europe and the US, bringing European musicians to the US for collaborations with Americans. He was originally focused on free jazz and now largely uses the instrument simply to play with sound. These days he is playing mostly alto and soprano saxophones, and as a musical explorer his music ranges widely in vocabulary, depending on the situation and partners. He lives in Easton, which enables him to commute easily to NYC and Philadelphia. He has released 35 recordings, samples of which are available at his website:

Michael T. Bullock is a composer, sound artist and visual artist based in Troy NY. The range of his work includes contrabass, banjo, video instrumentalism, and illustration. Bullock performs across the entire US and in Europe, collaborating with a huge range of artists, including Pauline Oliveros, Christian Wolff, Steve Roden, Bhob Rainey and Greg Kelley of nmperign, Mazen Kerbaj and Theodore Bikel.

His groundbreaking solo contrabass playing has brought him to medieval chapels and the side of a mountain. He also performs with the BSC, an octet of Boston-based improvisers; as the trio MAWJA with Kerbaj and Vic Rawlings; and in the multidisciplinary duo rise set twilight. Bullock is the founder of Chloë Recordings. He is currently a doctoral candidate in the Arts Department at RPI in Troy, where he researches noise, feedback, and non-idiomatic music cultures.

Alex Chechile (b.1980, Boston, MA) is a composer, improviser, and interdisciplinary media artist who is currently working to explore and utilize the relationship between human physiology and the act of musical creation by developing homemade biofeedback music performance systems. He received a BA in Composition and Theory from Tufts University in 2003, and is presently finishing an MFA in the Electronic Arts at Rensselaer in Troy, NY.

An avid performer of music with improvisation at its core, Alex has played in a variety of ensembles ranging from New Music to Noise, Javanese Gamelan, and West African Drumming, and is frequently performing with Pauline Oliveros both in and out of Tintinnabulate.
His previous work includes compositions for acoustic chamber ensembles, electro-acoustic configurations, as well as installations, video pieces, and stop-motion animation. His work has been shown in festivals both stateside and abroad.

Jefferson Pitcher (b. Redwood City, CA, 1972) is a composer, improviser, sound and video artist from Northern California. He plays primarily electric guitar, making sounds like birds, boats, engines and whales gliding in and out of a dense fog. Although much of his work explores feedback and prepared guitar, he also draws heavily from his love for melody, the simplicity of minimalist composers, and a long history of performing and recording in the west coast indie-rock scene as a singer-songwriter, where he fronted the band Above the Orange Trees. During his teens, Pitcher was immersed in the San Francisco Bay Area punk scene, playing in bands and attending volunteer meetings at the now legendary 924 Gilman Street in Berkeley. He was deeply influenced by the DIY philosophy, and the clean, simple melodies of the music, both of which extend into his work today.


Stay in touch, and we'll be seeing you
Posted by Albany Sonic Arts Collective at 11:41 AM