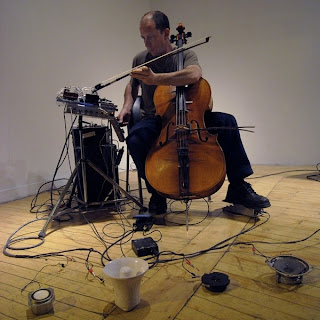 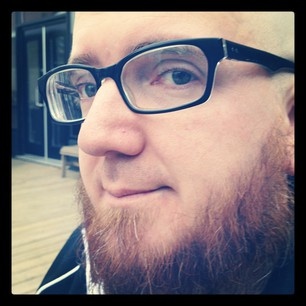 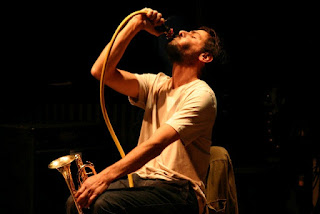 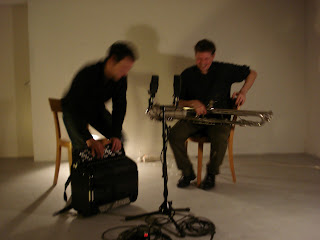 Join us on Tuesday 9/25 for another incredible night of experimental music.  This one features the return of ASAC alum Mike Bullock, along with some very special guests.
Tuesday 9/25
Upstate Artists Guild
247 Lark St.
Albany

Mawja formed in 2004 in Boston, MA, USA, when Beirut trumpeter Mazen Kerbaj met bassist Mike Bullock and cellist Vic Rawlings at their first gig. The group has since performed in cities across the eastern US. Mawja was an ensemble in residence at STEIM in Amsterdam, Netherlands, during Kerbaj's curatorship there in 2007. They have released two CDs, on Kerbaj's al Maslakh and Bullock's Chloë imprints. Their music incorporates customized electronics, extensive instrument modifications, and modular synthesis.

Mazen Kerbaj, born in 1975, lives and works in Beirut.  His main activities are comics, paintings and music. He published 11 books and many short stories and drawings in anthologies, newspapers and magazines in Lebanon, Europe, and the USA, and exhibited his work both in solo and in collective exhibitions in Lebanon, France, England, Spain, Sweden, Germany, Switzerland, Australia, Dubai, Malaysia and the USA.

Mazen Kerbaj is also one of the founders of the Lebanese free improvisation scene, both as a trumpet player and as an active member in the MILL association that organizes the annual Irtijal festival (www.irtijal.org) in Beirut since 2001. In 2005 he launches Al Maslakh, the first label for this music in the region (www.almaslakh.org). In 2009, after fructuous collaborations with Lebanese cult punk rock band Scrambled Eggs he launches a new sub-label, Johnny Kafta’s Kids Menu (www.johnnykafta.com) to produce alternative and experimental rock music from Lebanon.

Mike Bullock is a composer, improviser, intermedia artist, scholar based around Boston, MA. His modes of work include electroacoustic composition, installation, drawing, and video. Bullock performs across the US and in Europe, collaborating with a huge range of artists including Pauline Oliveros, Christian Wolff, Steve Roden, Bhob Rainey and Greg Kelley of nmperign, Mazen Kerbaj, and Theodore Bikel.

In 2010 he and Linda Aubry Bullock co-founded Shadowselves, a platform for their new media work. Bullock’s music has been released by numerous labels including Intransitive, Important, Winds Measure, Sedimental, Grob, 1.8sec, al Maslakh, and Homophoni. He received a PhD from the Arts Department at Rensselaer Polytechnic Institute in Troy, NY, and has taught and lectured in the US and Europe on field recording and improvisation.

Vic Rawlings (cello/ electronics) employs a still and unstable sound language ranging from visceral excess to extreme austerity. He uses an amplified cello augmented with extensive and invasive preparations of his design, adapted from Baroque-era designs. On this instrument he has developed a vocabulary of extended techniques, approaching near-total abstraction from the cello. As an entirely separate unit, he uses and continually develops a modular electronic instrument with a highly unstable interface, acoustically realized by an array of exposed speaker elements. His writings on music/ instrumentation and contemporary music education have been published in Leonardo Music Journal and Intransitive Magazine. He has authored sound-based music and listening curricula that engage students at all levels in participatory experiences in which they often encounter unfamiliar experiential/ aesthetic territory. He presents in settings ranging from Ivy-League Universities to juvenile detention facilities.

Chris Heenan (Berlin) and Jonas Kocher (Biel/Bien) work with the unlikely pairing of contrabass clarinet and accordion using improvisation to create worlds of changing depth and mood that both expand upon and fixate on particular sonic zones while simultaneously belying the instrumentation of the duo. Sudden shifts in texture and tempo become to areas of quiet and stasis, a reprieve from constant movement that gives way to a burst of loud focused activity.

Chris Heenan (Washington D.C., 1969) lives in Berlin and is an active composer/ performer and organizer of experimental music. He performs on alto saxophone, contrabass clarinet, and analog synthesizer in contexts ranging from solo to large groups and in various ongoing projects. He uses these instruments to investigate new musical forms, noise, and improvisation both in his solo work and in collaboration with composers and performers such as actors, musicians, dancers, and visual artists. Heenan has developed a formidable solo voice on his wind instruments, particularly with the contrabass clarinet where he uses extended techniques, often incorporating multiphonics with surprising results, to reveal the subtleties inherent to the instrument. Heenan’s regular projects include Nordzucker (with Michael Maierhof, Birgit Ulher, and Lars Scherzberg), PIVOT (with Liz Allbee), Trigger (with Matthias Müller and Nils Ostendorf), Team Up (a trio with Jeremy Drake and a revolving third member percussionist), Phantom Limb and Bison (with Chris Forsyth, Jaime Fennelly, and Shawn Hansen), a duo with zitherist Dimitra Lazaridou Chatzigoga and a contrabass clarinet and percussion duo with Michael Vorfeld.
www.chrisheenan.com


Chris Heenan and Jonas Kocher are performing with the support of Pro Helvetia, the Swiss Arts Council.

Posted by Albany Sonic Arts Collective at 10:16 AM No comments: 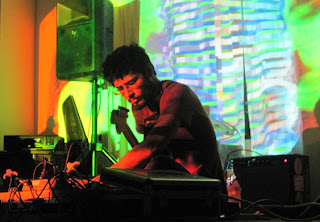 Another fantastic night of electronic improvised music, presented by the Albany Sonic Arts Collective. This time we'll be hosting Kevin Greenspon from California. Plus more acts to be announced soon!

Kevin Greenspon is a musician from Los Angeles, CA that blends ambient, electronic, drone, field recording and harsh noise composition into short songs that can be likened to miniature film scores. Primarily using guitar, effects and tape collage techniques, each song is an emotionally engaging arrangement of melodies and electronics fueled by a storytelling nature.

Century Plants are the Albany-based duo of Ray Hare (electronics, guitars, vocals) and Eric Hardiman (guitars, bass, electronics).  For the past 5+ years, Century Plants have explored the abstract intersections between genres such as psych, dub, noise, minimalism, rock, and others. Ever restless, their approach to any given show can vary wildly and the results are always entertaining.

Restraint and subtlety are key elements in Kevin Greenspon's work, carefully balancing between sparse quietude and dense layering of orchestral melodies and crackling textures as fingerpicked guitar notes seemingly swell in from reverse, weaving a constantly shifting atmosphere with deliberation and focus, never losing control of the space as a medium for channeling sound into song.

You can see videos, hear music, and read more about Kevin here:

HOPE TO SEE YOU THERE!!
Posted by Albany Sonic Arts Collective at 9:23 AM No comments: