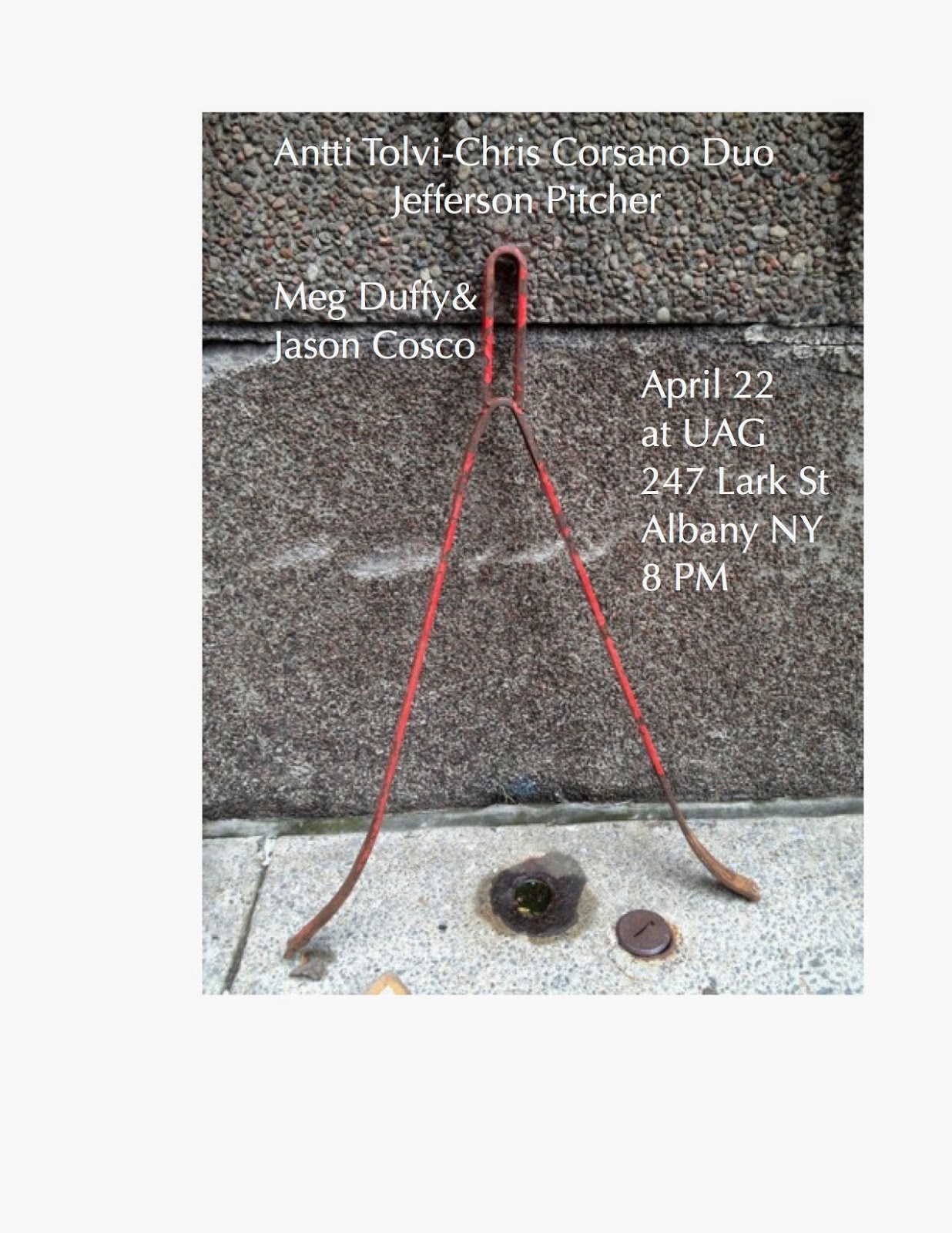 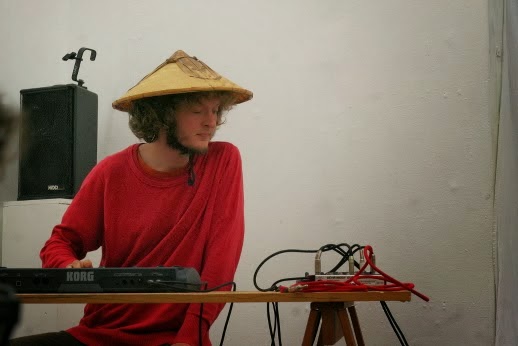 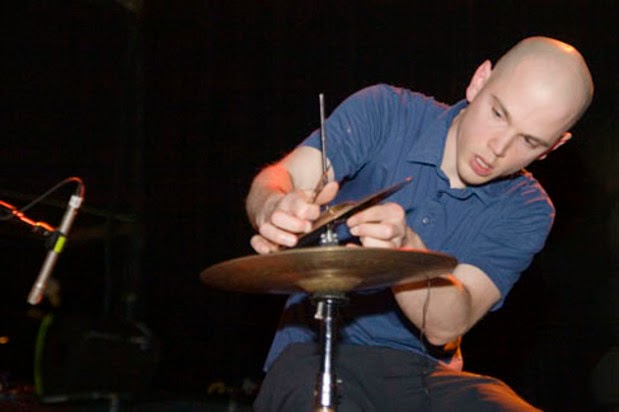 Antti Tolvi is a self-taught, multi-talented musician. He has played in numerous bands including Lau Nau, Rauhan Orkesteri, and Lauhkeat Lampaat. Born in ’77 in Panelia on the west coast of Finland, he began making music with his brothers, untutored. From 2000-2001 he studied classical Indian music in Varanasi, and this marked a turning point in his perception of music. On returning to his native Finland, he became embroiled in Free Jazz for a number of years, until a recent relocation to the countryside pushed him ever more towards solo improvisation – deriving inspiration from, in Antti’s own words, “harmonies, overtones, going into sound, no ends, no starts, from nothing comes something, just perfect, peace”.


‘Pianoketo’ can be seen as a culmination of Antti’s musical experiences to date. Featuring three extended meditations on a theme, all played on solo piano, it is a sound that defies categorisation, with nods towards classical, avant-garde, improvisation, psych, free jazz and Indian music. A shimmering flux of tones and harmonies, each of Pianoketo’s pieces seem to collect notes as they gather momentum, expanding and shifting form as Antti breathes life into them. At times, it is almost as if there are two instruments, the overtones working like feedback, playing counter-melodies as notes weave through each other. Antti’s technique combines neatly with the personality of the instrument to convey an evocative, psychedelic nostalgia.

First spellbound by freely improvised music in the mid-1990s after witnessing performances by TEST, William Parker, Cecil Taylor, and others, Chris Corsano began a long-standing, high-energy partnership with Paul Flaherty in 1998. A move from western Massachusetts to the UK in 2005 led Corsano to develop an expanded solo music of his own, incorporating sax reeds, violin strings and bows, pot lids, and other everyday household items into his drum kit. In February 2006 he released his first solo recording, The Young Cricketer, and toured extensively throughout Europe, USA, and Japan. He spent 2007 and '08 as the drummer on Björk's Volta world tour, all the while weaving in shows and recordings on his days off with the likes of Evan Parker, Virginia Genta, and C. Spencer Yeh. Moving back to the U.S. in 2009, Corsano returned focus to his own projects, most notably a duo with Michael Flower, Rangda (with Sir Richard Bishop and Ben Chasny) and solo work, now revamped to include synthesizers and contact microphones in addition to his drum set and home-made acoustic instruments.

*****************
Jefferson Pitcher is a guitarist and composer originally from the San Francisco Bay Area. He spent his formative years involved in the DIY Berkeley punk-rock scene, at 924 Gilman Street, which still influences him today. While much of his work explores free improvisation, he also draws heavily on his gift for melody, as well as on the simple repetitions of minimalism, the space and North African influence of flamenco, and a history of performing and recording in the West Coast indie-rock scene as a singer-songwriter, where he fronted the band Above the Orange Trees.

Pitcher holds an MFA from Rensselaer Polytechnic Institute, where he studied improvisation and composition with Pauline Oliveros and Neil Rolnick. He is married to author and visual artist Keri Smith, and can often be found on some hilly country road riding his bicycle while daydreaming about the minutiae of guitars and the endless wonder of sound.

Meg Duffy﻿ is lead vocalist and guitarist for Hand Habits.  She deals in psychedelic pop/dream rock sounds with an emphasis on pretty and sad melodies, reverb, and guitar freakouts with simple but meaningful structures.  Jason Cosco is a core member of the Albany Sonic Arts Collective, and also plays in Albany's noise legends Grab Ass Cowboys, as well as performing solo.
Posted by Albany Sonic Arts Collective at 9:05 AM No comments: 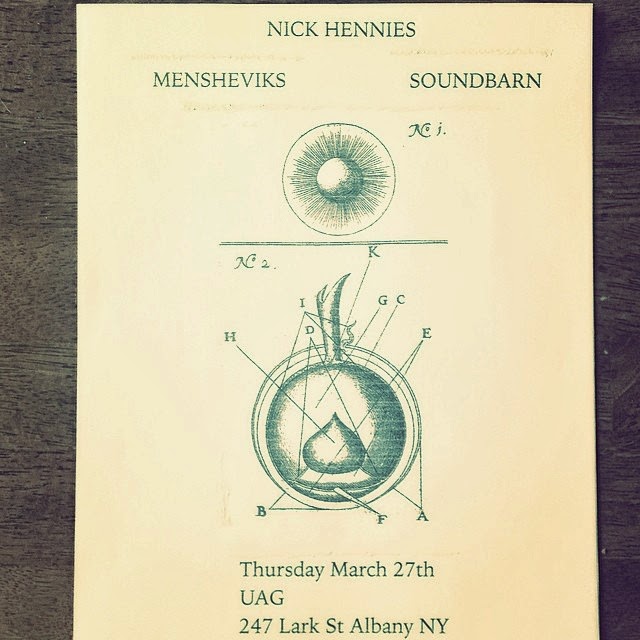 The Albany Sonic Arts Collective is proud to present another great show for your listening/viewing pleasure. Please come join us on Thursday March 27 for three acts of great live music. Show begins at 8PM and we're asking for a $5 donation for the touring artist (i.e. Nick Hennies!).

Nick Hennies is a percussionist and composer from Louisville, KY currently residing in Ithaca, NY. His work is primarily concerned with an immersive, psychoacoustic presentation of sound brought about by an often grueling, endurance-based performance practice that Nathan Thomas of Fluid Radio described as, "a highly sophisticated and refined performance technique...that starts and ends with listening and encourages a different way of listening from its audience." He received his M.A. in percussion from the University of California-San Diego in 2003 where he studied with renowned percussionist Steven Schick and is also a member of Meridian, a percussion trio with Tim Feeney and Greg Stuart. Prior to relocating to Ithaca Hennies was based in Austin, TX for ten years where he performed with the Austin New Music Co-op, The Weird Weeds and a variety of other projects. Hennies is also an interpreter of the work of other modern composers having recorded and performed music by John Cage, Alvin Lucier, Jandek, Peter Ablinger, Kunsu Shim, Jürg Frey, Ellen Fullman, Radu Malfatti, Arnold Dreyblatt and many others. His work as both composer and performer can be heard on a wide variety of labels including Quakebasket, Senufo Editions, Accidie, Quiet Design and many others. In 2013 Hennies also founded the record label Weighter Recordings for releasing his own work and other new and unusual music by living composers.

soundBarn is the duo project of Thomas Lail and Patrick Weklar. Previous performances have been fantastic, giving space for these cats to conjure strange worlds of otherness from their various guitars and preparations. Not to be missed.

Mensheviks is the collaborative group comprised of Matt Weston, Ray Hare, Mike Griffin, and Eric Hardiman. Each of these folks should be well known by ASAC audiences in other configurations, but if you haven't seen them perform together under this guise, come check it out. Each performance finds Mensheviks exploring new zones and sonic vistas.

See you there!
Posted by Albany Sonic Arts Collective at 12:18 PM No comments: