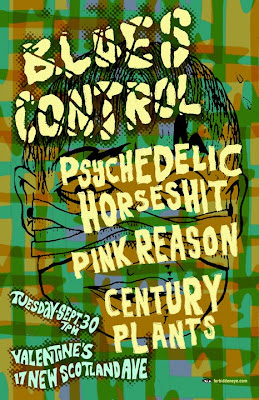 hi again everyone! Last Saturday's show was amazing - we were really happy with how everything turned out. BIG thanks to Steve Pierce and the Sanctuary for Independent Media in Troy for letting us collaborate with them. And an even bigger thanks to Weasel Walter, Mary Halvorson, and Peter Evans, who put on a beautiful set, as did the Empty Cage Quartet.

On to the next thing now! We're presenting an unusual show outside of our normal monthly events on Tuesday Sept. 30th. This one will be at Valentine's on New Scotland Avenue in Albany. We really hope you can be there - it's going to be a great night of music, only $5 too!!

It'll be the first Valentine's appearance for Century Plants, featuring ASAC's Ray Hare and Eric Hardiman. Blues Control are an amazing psychedelic duo from Brooklyn, with an LP on Woodsist and an upcoming one on Siltbreeze. Psychedelic Horseshit hail from Ohio, have graced the pages of Spin Magazine, and apparently stole the show from everybody at SXSW in Austin, TX. Finally, Pink Reason also come from NYC and they offer a fantastic and unique take on garage rock.

So the sounds will range from deconstructed, shambling garage rock to lo-fi pop nuggets (think early pavement or GBV!) to trippy psychedelia to raging cathartic drones. And I'm sure there will be plenty of stops in between.

Definitely another ASAC event not to miss! Holler if you have any questions...

SEE YOU THERE!!
Posted by Albany Sonic Arts Collective at 7:48 AM No comments: 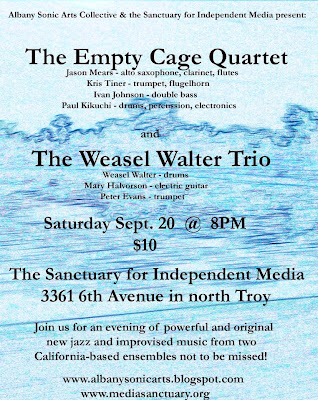 It's that time again, and it's big news. For the first time ever, ASAC will be co-presenting an event with the amazing Sanctuary for Independent Media in Troy. We could not be more thrilled about this, and hope you will all make it across the river for this extraordinary show! The Sanctuary has been one of our inspirations in starting ASAC this past year, and the chance to combine forces for this night will be great!!

The Sanctuary for Independent Media
3361 6th Avenue in north Troy (at 101st Street).

The Empty Cage Quartet will perform at 8 PM; the Weasel Walter Trio begins at 10 PM. Admission for the all-ages show is $10.

SEE YOU THERE!!!! Some information on these amazing musicians follows:

The Empty Cage Quartet has consistently been praised as one of the most powerful and original new jazz groups to emerge from the American West Coast. For nearly six years the group has explored imaginative new ways to integrate a diverse mix of musical influences ranging from shuffle swing to free jazz blowouts, minimalist
percussion loops to complex modernist gestures, robotic grooves, odd- meter marches, heavy rock, and nearly everything in between. Performances of this music involve an elaborate system of on-stage cues to navigate the flow of improvisation in, around, and out of modular compositional structures designed to cycle, overlap, combine
and recombine. The result is a continually evolving, multidimensional approach to jazz and new music performance, improvisational acuity, and compositional craft that Amazing Sounds Magazine has likened to an "urban folk music of the future."

The Empty Cage Quartet has toured extensively in the Western United States and in Canada and Europe, and they have received support from the American Composers Forum, the International Society for Improvised Music (ISIM), and Chamber Music America’s French-American Jazz Exchange. To date they have released six CD recordings that have been featured on jazz radio stations around the world and reviewed favorably in publications including Signal to Noise, The Wire, All About Jazz, Cadence Magazine, Jazz Hot, Paris Transatlantic Magazine, LA Weekly, Tucson Weekly, and Stride Magazine. Stratostrophic, their most recent album, is out now on the Clean Feed label, and in September they will make their New York City debut with a concert at
the Living Theatre co-sponsored by Clean Feed Festival III and the Sixth Annual Festival of New Trumpet Music (FONT).

A drummer whose current material straddles the many lines between punk, free jazz, no wave, improv, and much more, Weasel Walter will be playing with Mary Halvorson on guitar and Peter Evans on trumpet.

Weasel Walter (born Christopher Todd Walter in Rockford, Illinois) is a composer and instrumentalist who founded the band The Flying Luttenbachers in Chicago in 1991 with late jazz cult figure Hal Russell. Over the years, the band has included noted Chicago musicians such as Ken Vandermark, Jeb Bishop, Fred Lonberg-Holm, Dylan Posa, while creating an uncompromising and mercurial body of abstract music drawing equally from no wave, death metal, free jazz, gamelan, noise music, hardcore punk and modern classical. Walter relocated to the San Francisco Bay Area in 2003, where he formed the latest of many Luttenbachers lineups, remaining on percussion with
the addition of bassist Mike Green (Burmese), and virtuoso guitarist Ed Rodriguez (ex-Colossamite, Gorge Trio). Singular guitar phenomenon Mick Barr (Octis, Orthrelm) joined the group in 2005. The Flying Luttenbachers ceased to operate in late 2007. In addition to leading various free jazz ensembles under his own name, currently he is a member of XBXRX and Burmese.


Before relocating to the West Coast, Walter was a major contributor to the Chicago no-wave/noise/improvised music underground during the '90s and early 2000s. During this period, he performed as a founding member of bands such as The Flying Luttenbachers, Miss High Heel (with Jim O'Rourke and Azita of The Scissor Girls), Lake of Dracula (with Marlon Magas and Heather M. of the Scissor Girls), To Live and Shave in L.A. 2, and Hatewave (replacing founder Nandor Nevai) among others. Walter has collaborated with artists like Marlon Magas and Jim O’Rourke, Tom Smith in To Live and Shave in L.A., Henry Kaiser, Damon Smith, Vinny Golia, Joe Morris, Frank Gratkowski, William Winant and Ken Vandermark as well as many influential underground rock bands including Bobby Conn, U.S. Maple, Cock E.S.P., Curse of
the Birthmark, the Scissor Girls, Erase Errata, The Chicago Sound, Harry Pussy, Quintron, Sharon Cheslow, and Cheer-Accident, in addition to producing albums by the Coachwhips, Burmese, Total Shutdown, Arab on Radar and Glenn Branca.

Mary Halvorson is a guitarist, composer and improviser living in Brooklyn. She grew up in Boston and studied jazz at Wesleyan University and the New School. Since 2000 she has been performing regularly in New York with various groups and has toured Europe and the U.S. with the Anthony Braxton Quintet (Live at the Royal Festival
Hall, Leo Records) and Trevor Dunn’s Trio-Convulsant (Sister Phantom Owl Fish, Ipecac Recordings). She has also performed alongside Joe Morris, Nels Cline, John Tchicai, Elliott Sharp, Andrea Parkins, Marc Ribot, Tony Malaby, Oscar Noriega and Jason Moran. Current projects which Mary composes for and performs with include a chamber-music duo with violist Jessica Pavone (On and Off, Skirl Records, 2007); The Mary Halvorson Trio with John Hebert and Ches Smith; and the avant- rock band People (Misbegotten Man, I & Ear Records, 2007). She also performs regularly in ensembles led by Taylor Ho Bynum, Ted Reichman, Tatsuya Nakatani, Jason Cady, Matthew Welch, Brian Chase and Curtis Hasselbring.

Peter Evans is an American trumpet player based in New York, who specializes in improvisation and avant-garde music. Evans has been a member of the New York City musical community since 2003, when he moved to the city after graduating from The Oberlin Conservatory of Music. Peter currently works in a wide variety of areas, including solo performance, chamber orchestras, performance art, free improvised settings, electro-acoustic music and composition. In addition, he performs regularly as part of the Festival of New Trumpet Music, which is held annually in New York City.

Local presentation of the Empty Cage Quartet and the Weasel Walter Trio is co-sponsored by the Arts Department at RPI and Albany Sonic Arts Collective, made possible by volunteer labor, small financial contributions from hundreds of patrons of The Sanctuary For Independent Media and support from the New York State Music Fund.

The Sanctuary for Independent Media is a community media arts center located in an historic former church in Troy, NY. The venue is an intimate and acoustically excellent space which seats about 150. The Sanctuary hosts screening, production and performance facilities, training in media production and a meeting space for artists, activists and independent media makers of all kinds.