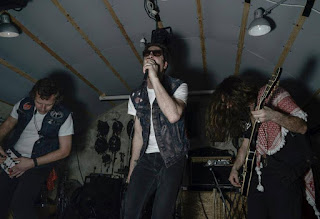 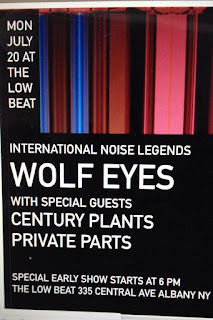 SHOW OF THE SUMMER. YES.

Direct from Michigan, this is the first ever Albany appearance by the legendary WOLF EYES! Not to be missed. John Olson + Nate Young + Crazy Jim will bring the TRIP METAL (TM) to Albany. Blink and you'll miss it!

SEE YOU THERE.
Posted by Albany Sonic Arts Collective at 9:27 PM No comments: 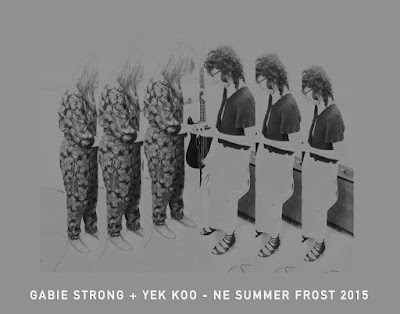 Helga Fassonaki, a recent transplant to New York City, creates and curates sound and visual installations, group situations, films, and performances that utilize and question temporality, power structures, subcultures and the human body as a sculptor of sound in space.

Floating between worlds of sound and visual art, Fassonaki borrows from one to set up the rhythms and pulses that inform the other. Fassonaki collaborates with New Zealander Andrew Scott in the free-psych duo Metal Rouge. Their Three for Malachi Ritcher album was included in the Public Collector’s exhibit in the 2014 Whitney Biennial and Experimental Sound Studio’s Audible gallery in Chicago. She also heads her own brand of noise in her solo project yek koo, exploring the body as a vehicle for the movement of sound. She is co-founder and director of Emerald Cocoon, a record label founded in 2008 devoted to releasing music from the ‘empty quarter’ – an area where the aesthetics of punk meet the philosophies of free jazz. In 2012, she began a series of staged hagiographies called Touching Them, Touching Me. In the first one, A Love Song for the Dead C, Fassonaki (re)created a post-punk era New Zealand bar at Human Resources gallery in Los Angeles. Uniting artists and musicians, the exhibition culminated in a 3-day performance series, Trapdoor Fucking Exit. Her Radio Concept Tour (2014-present) explores the relationship between body, microphone and air movement transmitted through radio waves. Her recent project Khal investigates the idea of a ‘living score’ by initiating a passage of visual scores, actions, and conversations between participating artists and the public. Iterations of it will be featured as a traveling exhibition in the US and NZ in 2015 at Glasshouse (Brooklyn, NY), LACA (Los Angeles, CA), Disjecta (Portland, OR), Audio Foundation Gallery (Auckland, NZ), and Nga Taonga Sound & Vision (Auckland, NZ) and other spaces TBA.

Gabie Strong is a California based artist and designer exploring spaces of degeneration, drone and decay as a means to improvise new arrangements of self-reflexive meaning. To explore the arena between exteriority and interiority, she uses sound performance, radio broadcasting, sculpture, photography and video as a mediums for experimentation. In looking for the differential, Strong invokes noise to summon the invisible.