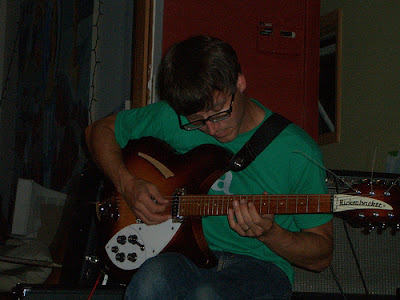 December's almost here, and there's a good show in the works this coming Saturday (12/1). Sponsored by The Capital District Federation of Ideas, (383.5 Madison Avenue, Albany). We're big fans of Area C, and it's bound to be a good time. Try to make this one if you can!

Michael Peters: The "writing" attributable to "Michael Peters"--his poetry, his visual poetry, his fiction, his critical writing--has appeared in SleepingFish, Wordfor/Word, Lungfull, Xtant, Spell, Tool a Magazine, Rhino, Spinning Jenny, Posted, Generator Press, American Weddings, and Kostelanetz's Dictionary of the Avant-Gardes, among many others. His visual poetry has appeared innumerous galleries and exhibits, and can be found in the Sackner Archive of Concrete and Visual Poetry,as well as in the Special Collections/Avante-Garde Libraries of both the Ohio State University and the University at Buffalo, among others. As a musician, most notably in Poem Rocket, Michael Peters has released recordings on a number of independent labels. In 2007, Atavistic (the avant jazz and rock label based out of Chicago), released Poem Rocket's fourth full-length recording, a double CD titled Invasion! Peters also performs and records with the sound-text performance group: The Be Blank Consort. In 2005, he performed at the Subtropics Experimental Music Festival in Miami both independently and as a member of the Consort. VAAST B1n; n Ephemerisi (Calamari, 2007) is his first book. Calamari Press: www.calamaripress.com/

Area C: A vertical of error; a transplant to the chamber. Dubbed "space rock for the information age" by WIRE magazine, AREA C weaves a complicated web of sound from minimal sources, mainly guitar, field recordings, Farfisa organand harmonium, sometimes with an old Hammond drum machine thrown to the wall. Drawing on remnants of other times and places, outdated and untested technologies, signals sent out but never received, AREA C was formed by Erik Carlson in 2003 as a means to examine the texture and tonal characteristics of sound. He also works with audio art, installations,and soundtracks and his work has been featured at the Cooper-Hewitt Design Museum and Terrastock. AREA C recently completed a permanent interactive installation titled "Low Rez / Hi Fi" on Vermont Avenue in Washington DC, a collaboration with architect J. Meejin Yoon. AREA C also has a new trance-like cd called "haunt" out on Last Visible Dog. http://www.areacmusic.com/
Stay tuned here for announcements about upcoming Albany Sonic Arts Collective shows - we've got some really exciting things happening in the Spring!
Posted by Albany Sonic Arts Collective at 8:25 PM No comments: 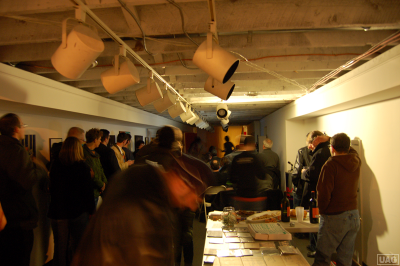 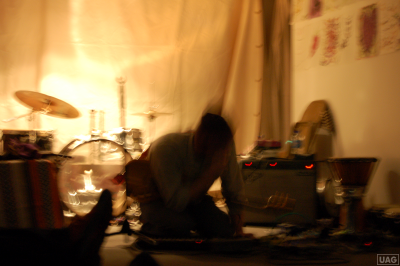 Thanks to everyone who attended our first event. The Albany Sonic Arts Collective (ASAC) is off to a good start. It was great meeting everybody, and we hope you enjoyed the music and food. We certainly did!
More pictures from the evening are available for viewing on the Upstate Artists Guild website:
http://upstateartistsguild.org/189
Special thanks to Rebecca, Colin, and Jason from UAG for helping us put the show on. And thanks to all the musicians who played - Grant, Cory, Jen, Ray, Eric, Cyrus, Ged, Noah, Kyle, and Jeremy.
Please send us an email at ASAC if you'd like to get on our announcement list for upcoming events, or to get involved with the collective in other ways. We can be reached at albanysonicarts@yahoo.com.
See you all soon for the next event! And drop us a line anytime, especially if you have ideas or would like to get involved...
Posted by Albany Sonic Arts Collective at 10:37 AM No comments: