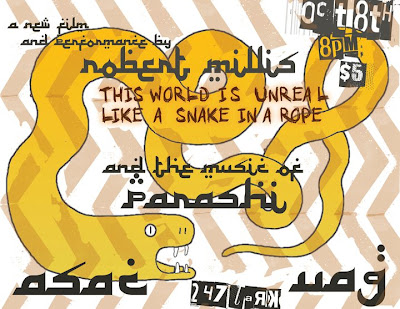 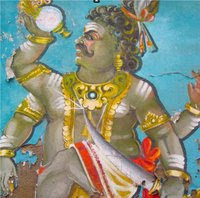 Robert Millis of the Climax Golden Twins will be joining us for a very special ASAC night. He'll be performing solo, and will also present a brand new SUBLIME FREQUENCIES film, called "This World is Unreal Like A Snake in a Rope". Also, we'll be hosting the first ASAC appearance by PARASHI!

Please join us for an incredible night of film and music.

THIS WORLD IS UNREAL LIKE A SNAKE IN A ROPE
...A film by Robert Millis (Sublime Frequencies)
55 minutes 2010

A collage of sights and sounds from the eternal never-ending collage that is INDIA. A trip through the Southern Indian state of Tamil Nadu featuring Hindu trance ceremonies, free jazz nagaswaram improvisations, impossibly loud cities, processions, devotion, blessings, color, abstractions, detail, music and more. India is impossible to know: it is too vast, too rich and too much of a dream. Offered here is one perspective, one dream, subjective and flawed, hanging by a thread. Robert Millis is a musician and artist, a founding member of Climax Golden Twins and AFCGT and a frequent contributor to the Sublime Frequencies and Dust-to-Digital record labels. His previous films include Phi Ta Khon: Ghosts of Isan and My Friend Rain and he was the co-author of Victrola Favorites released on Dust to Digital in 2008.

Here is a preview of the film:

PARASHI will also be playing a special set of music for the evening. Parashi is the solo project of Mike Griffin. Using microphones, pedals, tapes, synthesizers, guitar, metal bowl, washboard, tin box, tin whistle, noise generator, and more, Parashi is able to transport with his otherwordly noise-based improvisations. Not to be missed!

Posted by Albany Sonic Arts Collective at 4:16 AM No comments: