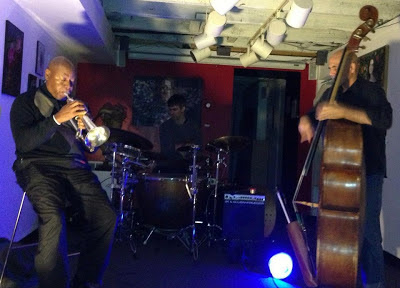 The Albany Sonic Arts Collective is proud to present a performance by the Arthur Brooks Ensemble V. Trumpeter-composer Arthur Brooks is one of the unsung heroes of the new music. In his 40+ year career he has collaborated with such legendary figures as Bill Dixon, Cecil Taylor, Sonny Sharrock, and Alan Silva. For over 20 years he taught alongside Dixon in the Black Music Division at Bennington College.  Also playing will be Jefferson Pitcher, performing a solo guitar set.

Jefferson Pitcher is a guitarist and filmmaker from the Western Massachusetts area. He has released work on such labels as Digitalis, Tape Drift, and Camera Obscura. In the past Pitcher has collaborated and performed with artists like Jonathan Chen, Doug van Nort, Okkyung Lee, Fred Frith, and Ikue Mori. His sound brings together a wide-ranging body of influences, all supplemented with formidable technique in both composition and improvisation.

Admission to the show is $5.00; things will begin at 8 PM. There will be at least one additional performer this evening, info will be posted as events warrant.
Posted by Albany Sonic Arts Collective at 2:42 AM No comments: