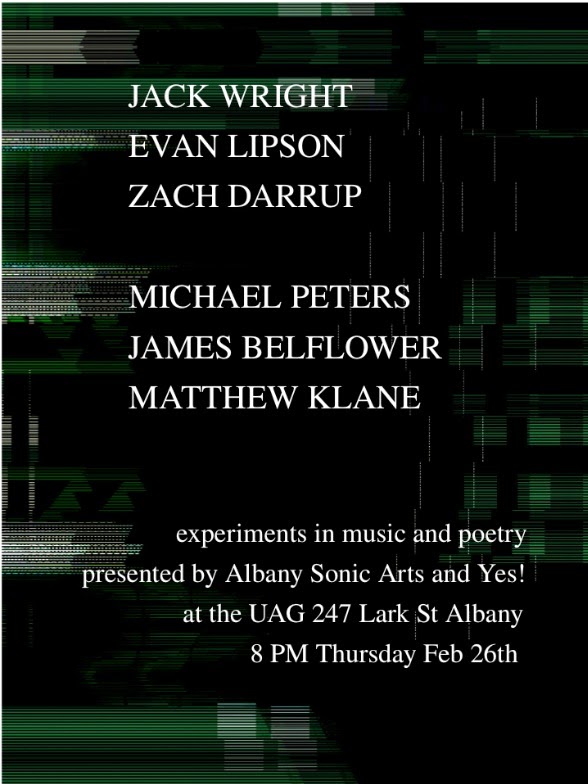 Come join us at the UPSTATE ARTISTS GUILD on Thursday Feb. 26th for a superb night of experimentalism.  This special event is being co-sponsored by the ALBANY SONIC ARTS COLLECTIVE and the YES! POETRY SERIES.

Using the motto "LET'S SEE WHAT HAPPENS!", three musicians and three poets will experiment with a variety of pairings.  You can expect a highly entertaining and original evening of sonic exploration with both music and voice.


Described twenty years ago as an "undergrounder by design," Jack Wright has been a saxophone improviser traveling through the US and Europe since the early 80s in search of interesting partners and playing situations. (Recent Europe Tours) Now at 72 he is well known for having brought improvised music into the heartland of America at a time when it was totally unknown. His musical range is as wide as his explorations, from fiery, breathless free jazz to quiet, breath-filled, and often animalistic sounds. A reviewer for the Washington Post said, "In the rarefied, underground world of experimental free improvisation, saxophonist Jack Wright is king". For more info: http://www.springgardenmusic.com/sgmhome.html,https://soundcloud.com/jackwright and http://jackiswright.wordpress.com/

Zachary Darrup is an improvising guitarist currently living in Philadelphia. During his early teenage years in the rural coal region of Pennsylvania a strange boy appeared like an angel, carrying a large cd booklet of wild musics of all sorts. This chance meeting at a pizza shop, plus tumultuous relationships with his home turf, school teachers, and other agents of law and rule enforcement led Zach to drop out and skip town, devoting himself to following music wherever it would take him--somewhere else. His techniques are informed by the musical possibilities of film language, jovial mockery and mimicry of plants, animals, and audience members, thoughtful room listening, word play, colors, and culinary experiments.

Evan Lipson (b. 1981), now from Chatanooga and soon to be from Providence RI. He has been active as a musician since adolescence. In an on-going pursuit of all things occult and aberrant, Lipson acquired an early interest in the lateral realms of visionary & experimental music -- seeking to transcend the existent paradigms of idiomatic expression. His formative experiences were in underground rock, modernist composition, freak pop, jazz, noise, as well as various modes of improvisation. Lipson cultivates a palpably intense and vehemently iconoclastic body of music, as exemplified by too long a list of notable groups, but including Satanized and Normal Love.

Michael Peters is the author of the sound-imaging poem Vaast Bin (Calamari Press) and other assorted language art and sound works.  Text and digital-based work has appeared in journals like GAFF, Polis, Barzakh, PEEP/SHOW, Bright Pink Mosquito, unarmed, SleepingFish, Word for/Word, BathHouse Hypermedia Journal, and Hyperrhiz: New Media Cultures, among many others. Visual-poetic manifestations are in avant-garde libraries, special collections, and have appeared in galleries, journals, and anthologies—The Last Vispo Anthology: 1998 – 2008 and the forthcoming Poets for Living Waters Anthology are the latest. Peters cut his sound-imaging teeth in the rock group Poem Rocket (Atavistic), and continues to explore sound-imaging in solo performances and installations, as well as in improvisational collaborations with the likes of Area C, Jack Wright, The Be Blank Consort, and Al Margolis (If, Bwana). He is currently working on a book about sound environment programming. http://www.michael-peters.com/

James Belflower is a PhD candidate in contemporary poetry and poetics at SUNY Albany researching artists who intervene in Postmodern declarations of the “end of intimacy” by reassessing how sensory relationships complement new experiences of materiality, affect, and collectivity. He is the author of The Posture of Contour / A Public Primer (Spring Gun Press, 2013), Commuter (Instance Press, 2009), and Bird Leaves the Cornice, winner of the 2011 Spring Gun Press Chapbook Prize. His appears, or is forthcoming in: Aufgabe, Fence, and New American Writing among others. He co-curates the Yes! Poetry and Performance Series in Albany NY.

Matthew Klane is co-editor at Flim Forum Press. His books include B (Stockport Flats, 2008) and Che (Stockport Flats, 2013). An e-chap, from Of the Day, has recently been published by Delete Press (deletepress.org). Other new work can be found in Horse Less Review, Lit, Harp & Altar, and word for / word. He currently lives and writes in Albany, NY, where he co-curates the Yes! Poetry & Performance Series and teaches at Russell Sage College. See: matthewklane.blogspot.com.

Posted by Albany Sonic Arts Collective at 6:50 AM No comments: