TWO SHOWS in one week!!!

Two upcoming shows to tell you about next week. We know there's a lot going, but it'd be a serious mistake to miss out on these happenings. Albany is finally getting on the map for underground music, and these shows are a great example. And if you're feeling like you should make a choice, just take the chance and hit BOTH of these shows. We wouldn't steer you wrong!

And as usual, if you can't make it, tell a few of your pals - we really want to keep the energy of our past shows going, and we need you all there! Thanks for spreading the word.

8PM's the time. $10 is the suggested donation. Hair Police are amazing, and include Mike Connelly from Wolf Eyes, if that helps sweeten the deal for you. If you like your rock LOUD, weird, righteous, and intense, be there...

The NO MORE BUSH Tour makes a stop in Albany!! We told you about this one already, and we'll keep reminding you because we don't want anyone sleeping on this special night. Rock legends, underground and otherwise, come together to celebrate the end of the Bush era. And since they're legends, this show will definitely be... legendary!

A fantastic array of talent, different styles, genres, you name it. Show of the year in Albany? You bet. If you have questions about who the performers are, and why they're legends, just shoot us an email, or scroll down to the next post for some bios to read...

Hope to see you all out for these shows!
Posted by Albany Sonic Arts Collective at 8:46 AM No comments:

In conjunction with Ecstatic Yod, Ecstatic Peace, and Arthur Magazine, the Albany Sonic Arts Collective is proud to present:

Five years ago, in a time of woe for the underground, the country and the world, the members of the Ecstatic Yod Collective organized a tour called More Hair Less Bush. Including a variety of musicians and writers, the tour brought the flame of hope to cities cast into darkness by the hideous secretions of the Bush Twins.

Now, in 2008, as we prepare to enjoy thelong-promised fruits of regime change, we felt it was time to bring our show on the road again. But this time, rather than offering balm and apologies to the psychically wounded, we would like to celebrate the pre-dawn of a new day -- a day when the word “cheney” is once more an empty phrase we use to terrify youngsters. To this end, we have assembled a revolving cast of musicians and writers, all of whom honk the horn of freedom with both hands. We trust it will be a gas. Trinkets will be available at all shows. Tour schedule and bios follow. Support is being provided by Ecstatic Peace Records & Arthur Magazine.

50 FOOT WOMEN is a San Francisco-based duo with Jessi Leigh Swenson and Elaine Barry Kahn. Swenson is known for her trance-forming work with the Believers and Duck, Kahn is a wild card. Combined, they create and destroy small forms with the ease of kettle fish. They promise to have several secret weapons up their sleeves.

AXOLOTL is the ghost-wolf of New Jersey and all points west. Currently resident in the head of Karl Bauer, this ghost takes many forms, and uses many tools to do its jobs. On this tour, there is a functional involvement with several things. Psychedelic? You bet!

BYRON COLEY is a writer from Western Massachusetts . His organizational abilities are dwarfed by his capacity for letting a participle hang. He is a veteran of the More Hair tour.

JOHN MORTON is legend that begins in Cleveland , with the Electric Eels and spasmodic guitar art bonged against the arc of the infinite. Later, in Brooklyn , these inpulses devolved into more insanity and writing and art and phlug. Now, here he is again. He promises a theremin. Think fast! A veteran of the More Hair process.

CHARLES PLYMELL is one of the great writers of our age, and a ferociously talented/opinionate d editor, publisher and reader as well. Based for the last few decades in Cherry Valley , NY , Plymell’s evil eye and exquisite grasp of language and image are a deadly combination. It’s always an extreme pleasure to hear him read. A veteran of More Hair.

JACK ROSE is one of the pre-eminent geniuses of acoustic guitar creation and dissemblage. In the years since he left Pelt, Jack has toured and recorded incessantly, inventing moves that would make past masters blush. His fingers are magic fever generators.

KATE VILLAGE is one of the most savage guitar players our planet has yet produced. Her most blues-wailing style with Crystalized Movements, Vermonster, B.O.R.B., Magic Hour, Major Stars and solo have made her an icon to the youth of every nation. Watch her bring it to the masses.

VALERIE WEBBER is a Montreal-based writer whose poetry and prose combines a naïve belief in perefection and a wise-ass sneer at its collapsing façade. Her work has been widely published in Canada and the U.S.. , and her voice has a soft purity, oftimes at odds with its content. She is a veteran of the More Hair tour.

WOVOKA is an upstate channeler of mystery-volk in all its drugged and writhing splendor. Rarely spied except through a cloud of basement smoke, their vibes are their amplifiers.

ZAIKA is a duo comprised of Marcia Bassett and Tom Carter. Both are long-time and very active members of the American underground scene: Marcia with Un, Double Leopards, Shackamaxon, Hototogisu, GHQ and others; Tom with The Mike Gunn, Charalambides, Badgerlore, Friday Group, Kyrgyz, Spiderwebs, etc. Together, they create very special kinds of silver cloud eruptions.

ZIAMALUCH represents the bridge between ERL and Burnt Hills in terms of Albany ’s underground continuum. Unseen in public since opening a gig for Universal Indians, Ziamaluch once again scales the scales.
Posted by Albany Sonic Arts Collective at 7:45 AM 2 comments: 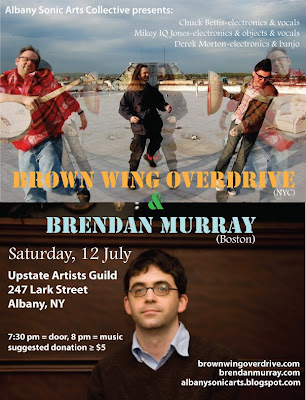 Hope you can all make it for this one - it's going to be great!!!

See you there.
Posted by Albany Sonic Arts Collective at 9:27 AM No comments: