ASAC and Proctor's bring you FAUST with CENTURY PLANTS and HOLLAND HOPSON! 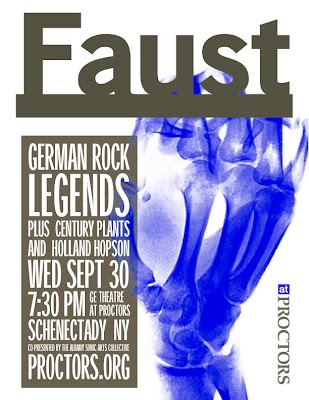 Wednesday Sept. 30th - ASAC, in conjunction with Proctor's Theater in Schenectady, is proud to present F A U S T, the original krautrock legends from the early 1970s in Germany. Even better, ASAC's own CENTURY PLANTS and HOLLAND HOPSON will be opening the show. This is going to be a very special night, at the GE Theater in Proctor's, and we hope you'll all be there!!!!
Posted by Albany Sonic Arts Collective at 11:36 AM 5 comments:

REMINDER - show tomorrow night!!! And as an extra special incentive, mystery group BLACK CHALK have been added to the bill. Don't miss this one!

An amazing night of music, presented by the Albany Sonic Arts Collective:

ELI KESZLER AND ASHLEY PAUL.
Keszler is a percussionist/multi-instrumentalist/composer, and Paul plays sax and clarinet. Together their duo is garnering widespread praise for a brand newly released duo LP. Having spent the last 3 years performing all over the northeast, they have developed a unique sound, combining the piercing high pitched resonance of Keszler's bowed crotales and cymbals with altissimo sustains and drastic pitch bends of Paul's alto saxophone and clarinet. The split tone combinations from these instruments is surprising and overwhelming, creating continuous, multi-layered, dense, shifting harmonics and intense inner-ear sound. Spinning discs, invented resonating metal configurations, bending reed tones, and voice interference carefully blend, creating a wild texture that is both harsh and striking . This is contrasted with Paul's guttural string attacks, which meet the rapid-fire movement of Keszler's low end bowed cymbals and jittery crash.

PEAKING LIGHTS features husband and wife duo Aaron Coyes and Indra Dunis from Madison, WI. They've played in many other bands, but as Peaking Lights, their music has been described as avant-pop drone psychedelia, and live they are mesmerizing. A review of their recent LP says, "Sparks fly in the form of warm fuzz and soft melodies when Aaron Coyes and Indra Dunis work through marital bliss. Existing in the open space between the parallel of primordial instinct and the delicate creation, Peaking Lights call on psychedelia’s most potent qualities as it floats through 7 mysterious tracks. "Imaginary Falcons" draws from the distorted pop of Wavves and Times New Viking — and in much the same way those entities wrap those garage-based trappings around saccharine pop and beachside lullabyes, Coyes and Dunis work muzzled magic enveloping their Casio tones, monochromatic drones, and blissed-out synth with the power of lo-fi static and bass heavy production. “Silver Tongues, Soft Whispers” rains down like droplets of Quasi; lightly patterned keystrokes given a Hammond B3 treatment in part due to the low frequency in which it is recorded. “New News” is a slow burner; refusing to climax despite a careful build up of white noise squalls and lackadaisical keyboard pokes.
Never do Coyes and Dunis weigh down their at-home operation by trying to cram too much into each track, allowing their minimal DIY to flourish in simplicity rather than drown in excess.