A mere $5 suggested donation is requested for each show.  Descriptions of all the performers below.

Posted by Albany Sonic Arts Collective at 7:03 PM No comments: 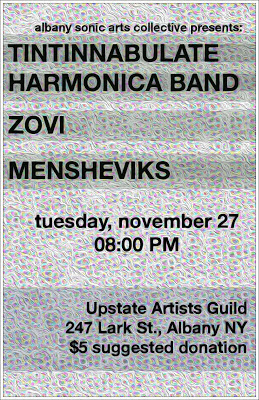 On Tuesday night, Nov. 27, follow your Thanksgiving weekend with an amazing night of music presented by ASAC. Three sets of music for a mere $5 suggested donation. More is always appreciated if you can afford it. All of the money will go to Pauline and her band. If for some reason you're not familiar with Pauline's reputation and/or body of work, please consider attending this show! She is truly one of the world's most esteemed and accomplished improvisors and experimental musicians. At age 80, She rec

ently had a 10CD retrospective box set released on Important Records. To say that she is a legend and inspiration to all experimental musicians would be an incredible understatement. On this special night, she will bring a brand new ensemble out for their debut live performance!!

The Tintinnabulate Harmonica Band, comprised of members and peers of Pauline Oliveros' Creative Collaborations seminar, is a fully improvisational group focusing on constructing sonic territories using harmonica as the primary instrument. The band works from themes, instructions, and guidelines around which to improvise. Harmonica is the primary instrument of choice, however other instruments and sound sources are also used.

Zovi is the solo project of Zovi McEntee from RPI, also a member of Pauline's band above.

Then, just a paltry two nights later, it'll be...

Trumpeter/composer Arthur Brooks is one of the unsung heroes of the new music, and has collaborated with Bill Dixon, Cecil Taylor, Frank Wright, Alan Silva, Sonny Sharrock, and many others.

For this performance, he will be joined by Anthony Santor (bass), and Matt Weston (percussion).