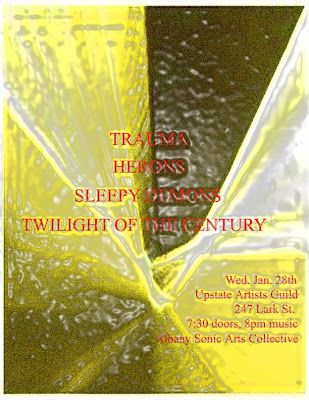 yes, that's right - we are back and ready to bring on 2009 in style! More details soon, but here's the basic scoop:

Trauma is the duo of Ben Hall + Chris Riggs from Michigan. Ben also plays drums with Graveyards (featuring John Olson of Wolf Eyes). Chris is a serious guitar shredder. Together, they create powerful, post-free jazz and punk informed music that could be described as DISCHARGE meets AMM, with a healthy dose of Morroccan Gnawa trance music thrown in. Not to be missed!

Herons hail from Annandale-on-Hudson (ie Bard College) just down the river. They make wonderful sonic stews that one might descibe as psychedelic, hypnotic, heavy, deep, and utterly engaging. They often perform with excellent multimedia video projections.

Sleepy Demons are from Hudson and feature musicians who have played ASAC before in the past year (Cyrus Gengras, Jeremy Kelly). An amazing amalgam of talent, they dabble in drone, noise, psychedelia, homemade electronics, and much much more.

Twilight of the Century is the resident ASAC collaborative group of Linda Aubry Bullock, Mike Bullock, Ray Hare, and Eric Hardiman. They each play in several other projects, but together they conjure a unique blend of improvised and often atmposhpheric doom-laden beauty.

Should be a fun night - come help us start the year off right. Only a $5 donation.