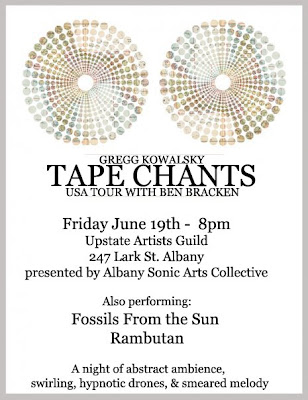 On Friday June 19th, we'll be hosting Gregg Kowalsky and Ben Bracken, both from Oakland, California. Gregg will be presenting his TAPE CHANTS project, to coincide with a new CD release on Kranky Records. Also on the bill are Fossils From the Sun and Rambutan. This will be a very special treat for ASAC, so please make sure to join us!


MORE ABOUT THE PERFORMERS:
GREGG KOWALSKY resides in Oakland, California where he completed a Master of Fine Arts degree in Electronic Music and Recording Media at Mills College. Kowalsky’s compositions range from drone and noise pieces to meditative psychedelia.

Kowalsky has had the opportunity to perform throughout Europe and the United States over the past several years. He participated in festivals such as WDR’s SoundArt-Köln Festival, Sonar, OFFF (Online Flash-Film Festival) and The Nursery Summer Festival in Sweden. His recordings have released on Kranky, Rootstrata, Kning Disk, Nosordo, Ruralfaune and others. He has composed for dance, sound installations, film and acoustic ensembles.

BEN BRACKEN For the past 15 years, Ben Bracken has slowly been creating a unique sonic language utilizing electronics, acoustic sound sources (guitar, cymbal, bells, found objects, etc), electric guitar, and field recordings.
Primarily interested in the possibilities of a kind of echo-relocation that exists with sound based art, his work has oscillated from performance to installation, often blurring the lines between the two. In both, the location of the event becomes an active participant, intimately shaping the nature and direction of each work.

After finishing a graduate degree in Electronic Music at Mills College in Oakland, CA, Ben moved on to his current technical support position at Cycling '74, the developers of Max/MSP, which he utilizes as one of many tools in his live performances. Some previous or current musical groups include Crystal Village (With Gregg Kowalsky), Flashpapr, Tiny Lights, Remote Viewing Ensemble, Duo with Luis Maurette, Duo with Zach Wallace, Bones (with Jacqueline Gordon). Ben has improvised with Le-Quan Ninh, Brent Guetzeit, Kevin Drumm, Peter Kowald, Chris Cutler, Phil Minton, Rhodri Davies, Werner Dafeldecker, Fred Van Hove, Johannes Bauer, among others.

For this performance, Ben will perform a version of a new work in progress which utilizes the computer analysis of feedback tones to excite an unplayed guitar.

FOSSILS FROM THE SUN is the solo project of Ray Hare, also a member of Century Plants, Burnt Hills, and Twilight of the Century, and Transcendental Manship Highway. Fossils From the Sun incorporates the use of minimal electronics, guitar, feedback loops, microphones, and vocals. Hare's music has been described as "Slow evolutions coming across like a piper’s lament,but with more friction / swooping ...burring in sustain, like wire skyscrapers wavering round a puppet master's hands... Gathering and nitric, marvellous stuff that glows with an energy you can literally taste with your eyes..." Live performances from Fossils From the Sun are always intensely captivating.

RAMBUTAN is the solo project of Eric Hardiman, also part of Century Plants, Burnt Hills, Twilight of the Century, and Transcendental Manship Highway. As Rambutan, he has released recordings on Tape Drift, Abandon Ship, 905 Tapes, House of Alchemy, and Stunned Records. Forthcoming releases are due out on Small Doses, Digitalis, Existential Cloth Recordings, Peasant Magik, and Tired Trails. Hardiman is also a founding member of ASAC and runs Tape Drift Records.
Posted by Albany Sonic Arts Collective at 12:46 PM 4 comments:

Stay tuned here for more show announcements soon, but in the meantime, here's some great ASAC video clips you might want to watch. Hope to see you all soon!

http://www.youtube.com/user/albanysonicarts
Posted by Albany Sonic Arts Collective at 7:11 AM No comments: